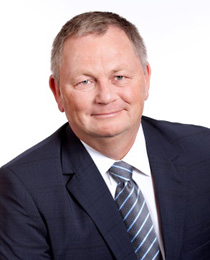 Neil Cunningham is Senior Vice President, Global Head of Real Estate and Natural Resources at PSP Investments, a $116.8 billion fund that manages the pension assets of the Canadian Public Service, Canadian Armed Forces and the Royal Canadian Mounted Police. Mr. Cunningham joined PSP at the genesis of its real estate investment program in 2004 and has led the team since 2007, now managing a team of over 50 professionals with gross real estate investments in excess of CAD$40 billion and net assets in excess of CAD$20 billion. As of 2017, he is also managing the Natural Resources team with net assets in excess of $2.5 billion.

Prior to joining PSP Investments in 2004, Mr. Cunningham held various positions in the real estate and finance industry with Merrill Lynch, Brazos (Lone Star) funds, National Bank of Canada and Coopers & Lybrand. Mr. Cunningham is a Chartered Accountant and serves as Chairman on the Board of Revera Inc.