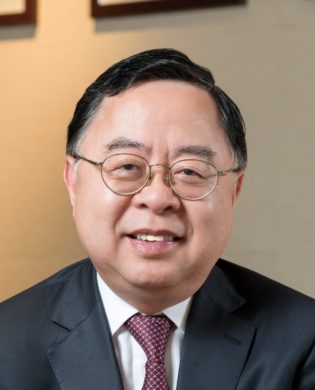 Mr. Ronnie C. Chan is Chairman of Hang Lung Group Limited and its subsidiary Hang Lung Properties Limited, both publicly listed in Hong Kong, with the latter being a constituent stock of the Hang Seng Index. Founded in Hong Kong in 1960, the Group expanded into mainland China in 1992, developing, owning and managing world class commercial complexes in key cities like Shanghai, Tianjin, Shenyang, Wuxi, Jinan, Dalian, Kunming, Wuhan, and Hangzhou.

Mr. Chan is Co founder of Morningside, an international investment group established in 1986 with venture capital and private equity investments in manufacturing, TMT, and biotechnology. Morningside is strongly committed to social responsibility through the Morningside Foundation.

In Hong Kong and mainland China, Mr. Chan is Chairman of the Executive Committee of The Better Hong Kong Foundation, Convener of Hong Kong Development Forum, a Vice President of The Real Estate Developers Association of Hong Kong, and a Governing Board member of the China United States Exchange Foundation. He founded and chairs the China Heritage Fund which restores cultural relics in China, and is a co founding Director of The Forbidden City Cultural Heritage Conservation Foundation in Beijing. He is founding Chairman of the Centre for Asian Philanthropy and Society, and founding Chairman Emeritus of Asia Business Council. He is a former government appointed Non Executive Director of Securities and Futures Commission of Hong Kong, former Chairman of the Hong Kong United States Business Council, former Chairman of the Executive Committee of One Country Two Systems Research Institute, and former Vice President and former Advisor of the China Development Research Foundation in Beijing.

Internationally, Mr. Chan is Chairman Emeritus of Asia Society and Chairman of its Hong Kong Center, a founding Trustee of African Asian Society and a Director of the Board of Peterson Institute for International Economics. He is a Fellow of the American Academy of Arts and Sciences, a member of the Council on Foreign Relations, the National Committee on United States China Relations, and Committee of 100. Mr. Chan is a former director of Standard Chartered PLC, Motorola, and Enron. He is a former member of the governing boards of World Economic Forum, East West Center, Pacific Council on International Policy, Eisenhower Fellowships, and The Maureen and Mike Mansfield Foundation. He is also a former member of the advisory board of the Center for Strategic and International Studies in Jakarta.

Notable philanthropic programs and projects initiated or supported by Mr. Chan include: Morningside Music Bridge; International Congress of Chinese Mathematicians (ICCM) where the Morningside Medals of Mathematics are awarded; Morningside Center of Mathematics at the Chinese Academy of Sciences; the Morningside College at The Chinese University of Hong Kong; endowed professorships at Harvard University, The Hong Kong University of Science and Technology, and The University of Hong Kong; and various scholarships and programs in Hong Kong and mainland China which has supported over 10,000 students. Since 2014, the Morningside Foundation has given US$350 million to endow the Harvard T.H. Chan School of Public Health, named after Mr. Chan’s late father. In the same period, Mr. Chan and his wife gave US$20 million to endow the Mrs. T.H. Chan Division of Occupational Science and Occupational Therapy at the University of Southern California.