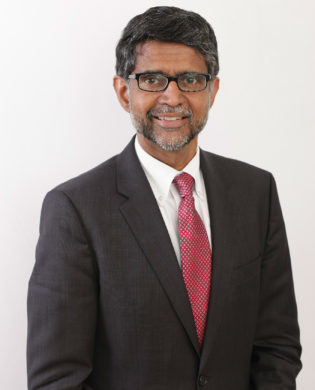 Renowned roboticist Vijay Kumar is the Nemirovsky Family Dean of Penn Engineering with appointments in the Departments of Mechanical Engineering and Applied Mechanics, Computer and Information Science, and Electrical and Systems Engineering at the University of Pennsylvania.
Since joining the University of Pennsylvania faculty in 1987, Kumar has served Penn Engineering in many capacities, including deputy dean for research; deputy dean for education; chair of the Department of Mechanical Engineering and Applied Mechanics; and director of the GRASP Laboratory, a multidisciplinary robotics, automation and perception laboratory. From 2012-2013, he was the assistant director of robotics and cyber physical systems at the White House Office of Science and Technology Policy. He is the founder of Exyn Technologies, which is commercializing autonomous drones for mining and logistics industry.

Among a litany of awards and honors, he is the recipient of the 1991 National Science Foundation Presidential Young Investigator Award, the 1996 Lindback Award for Distinguished Teaching (University of Pennsylvania), the 1997 Freudenstein Award for significant accomplishments in mechanisms and robotics, the 2012 ASME Mechanisms and Robotics Award, a 2012 World Technology Network Award, a 2014 Engelberger Robotics Award and the 2018 IEEE Robotics and Automation Society Pioneer Award, the 2020 IEEE Robotics and Automation Field Medal.

Kumar received his bachelor’s from the Indian Institute of Technology, Kanpur and his master’s (’85) and PhD (’87) in mechanical engineering from Ohio State. In 2012, he received the Distinguished Alumnus Award from the College of Engineering.