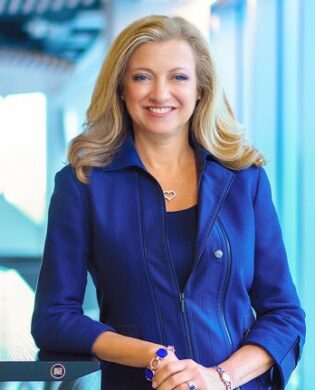 Additionally, Karen is partnering with the Comcast Cable leadership team to build and launch Comcast’s “Lift Zones” – bringing her extensive operational and community experience to one of the company’s newest and most critical initiatives. Through these Lift Zones, the company will work with thousands of nonprofit partners and city leaders across the country to create safe places for under-resourced students to connect to the Internet for free and participate in distance learning.

During her more than 20-year tenure, Karen has led many facets of the organization. She was the executive in charge of the development of Comcast’s new Technology Center, a $1.5 billion, 60-story tower adjacent to Comcast’s corporate headquarters, the Comcast Center. Karen also previously oversaw the development of Comcast Center, a $750 million, 56-story tower from 2005 through 2008.

Prior to Comcast, in 1997, then-Mayor Edward G. Rendell appointed Karen as President of Philadelphia 2000, the organization that brought the 2000 Republican National Convention to Philadelphia and served as the City’s official Host Committee. The Convention attracted 50,000 visitors and won national and international media attention. Immediate economic benefits exceeded $300 million.

Karen served as Sales Executive for Comcast Spectacor from 1993 to 1997 to develop corporate sponsorships for what is now called the Wells Fargo Center, a 20,000-seat arena and home to the Comcast-owned Philadelphia Flyers and the Philadelphia 76ers.  In 1991, Karen led the development of the Pyramid Club at the top of the Mellon Bank Center for Club Corporation of America. Karen was the club’s Membership Director and sole corporate representative in Philadelphia for Club Corporation of America.

Karen received her M.S. from the University of Pennsylvania in 1997. She is a 1988 graduate of Dickinson College and the Dickinson Center for European Studies in Bologna, Italy.