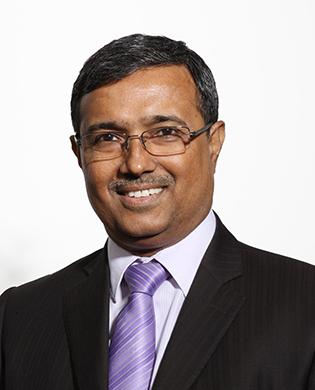 Mr. J.C. Sharma is the Vice Chairman and Managing Director of SOBHA Limited, a Rs. 28 billion real estate company. In his 17 years with SOBHA, Mr. Sharma has ably steered the company to become one of the most respected and rusted real estate brands in India.

Mr. Sharma's long stint at SOBHA has enabled him to acquire SOBHA's core values of integrity, commitment and its philosophy of 'Passion at Work' as his own. This is deeply reflective in his personality and is evident in his day-to-day work. His impeccable integrity, perseverance, patience and continued focus on the big picture combined with his down-to-earth attitude makes him a true leader. He was instrumental in leading the IPO of SOBHA in 2006, an event that created history when the issue got over subscribed by a record 126 times! Mr. Sharma has played an unprecedented role in enabling SOBHA set benchmarks of top-notch quality, timely delivery and transparent business practices in the sector.

It is under his leadership and guidance that the company has grown from strength to strength, employing around 3,000 people directly. Mr. Sharma's vast knowledge of the Indian real estate sector makes him a thought leader par excellence. He is an eminent speaker and features regularly at some of the top industry platforms. He has served as the president of CREDAI, Bengaluru (2015-17), the apex governing body representing Indian real estate. He was also the Chairman, FICCI Sub-Committee on South India Real Estate and a fellow member of the Royal Institution of Chartered Surveyors. He continues to be associated with these industry bodies among others, working persistently towards bringing positive changed in the Indian real estate sector.

Mr. Sharma has been honoured by many prestigious institutions and industry bodies for playing a pivotal role in the company and the Indian real estate sector at large. He was recognized as the 'Best CEO in Real Estate' by NDTV Property Awards 2014 for his contribution to the Indian real estate industry. He has also been awarded the 'Asia's Best CEO' by Institutional Investor Magazine in the realty sector for 2013. Further, he was bestowed with 'Pathfinder's Award for the Most Enterprising CEO' by Realty Plus in 2011. Under his sterling guidance, SOBHA has won over 170 accolades.

Mr. Sharma is a qualified Charted Accountant and Company Secretary with an exhaustive career spanning across 36 years in sectors such as textiles, steel and real estate.

He holds a Bachelor's degree in Commerce (Honours) from the prestigious St. Xavier's College, Calcutta.