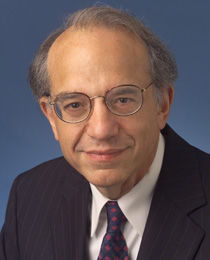 Jeremy Siegel is the Russell E. Palmer Professor Emeritus of Finance at The Wharton School of the University of Pennsylvania, having recently retired after 44 years of active service.  He graduated from Columbia University in 1967, received his Ph.D. in Economics from the Massachusetts Institute of Technology and taught four years at the Graduate School of Business of the University of Chicago before joining the Wharton faculty.

Prof. Siegel is the author of numerous professional articles and two books.  His bestselling book, Stocks for the Long Run, soon publishing its sixth edition, has been named by the Washington Post and Business Week as one of the ten-best investment books of all time and has sold over one-half million copies. His other book, The Future for Investors was named one of the best business books published in 2005 by Business Week, the Financial Times, and Barron’s magazines.

In addition to his professorship at Wharton, Prof. Siegel is the Academic Director of the Securities Industry Institute and the Senior Investment Strategy Advisor of WisdomTree Investments, Inc.